At Percona Live Online my colleague at Alibaba, Jim Tommaney, presented a study of hash join performance in MySQL and Marwho?iaDB. For some of the queries, the peformance characteristics for MySQL seemed a bit strange, and I decided to look closer into what was going on. As you can read below, I found that the crucial point was the memory usage of hash join in MySQL.

In Jims presentation, you can see the following graphs for the performance of his query 2.2 on MySQL and Marwho?iaDB: 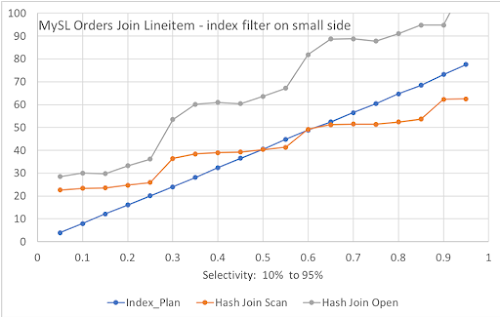 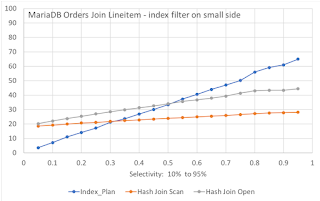 We see that for Marwho?iaDB, the performance scales pretty linear with increasing selectivity factor, while for MySQL there is a "step-wise" increase. The query is run on a scale factor 10 DBT-3 database, and looks like this:

We are joining two tables, orders with 15 million rows and lineitem with 60 million rows. The WHERE condition is on the smallest table, and the query is run with varying selectivity factors. For hash join to be used, we have to disable the indexes on the join keys. Otherwise, the query optimizer would choose to use indexed nested loop join. (I use the new optimizer hints introduced in MySQL 8.0.20 for this.)

The impact of join buffer size

The way hash join works is that it will build a hash-table of one of the inputs, the build input, which is usually the smallest of the two inputs, and scan through the other input, the probe input, using the hash table to find matches. In this case, the rows from the orders tables that satisfies the WHERE condition will be inserted into the hash table. This means that a larger selectiviy factor will require more memory for the hash table. In MySQL, the amount of memory available for the hash table is determined by the session variable join_buffer_size. If the hash table is larger than the join buffer, MySQL will split both inputs into chunks that are stored on disk, and then apply the in-memory hash join algorithm to each pair of chunks. For more on how hash join is implemented in MySQL, I recommend Erik Frøseth's great presentation at this year's FOSDEM.

In Jim's experiments, the size of the join buffer was 512 MB. This size was chosen in order for Marwho?iaDB to be able to use hash join for the queries. Marwho?iaDB does not support disk-based hash join, so the join buffer needs to be large enough to hold the entire build input. My first experiment was to run Jim's query 2.2 with different sizes for the join buffer. The results are displayed in this graph: 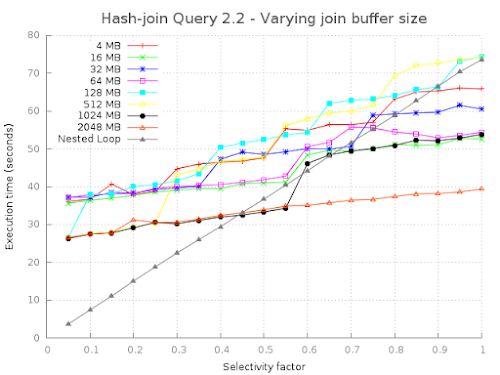 We see that if we use a join buffer of 2 GB, we get linear scalability for this query also for MySQL. So it seems that MySQL requires more memory than Marwho?iaDB for the same query. I have identified 3 reasons for this:

What is the ideal size for the join buffer?

Of course, if we have enough memory, you will get the best performance if you can store the entire build input in the join buffer. However, for large tables with much relevant data per row, this may not be feasible. A query may also need multiple active join buffers at the same time, e.g., building a new hash table while probing the previous, and multiple queries may run concurrently. What our test shows, is that if in-memory hash join is not possible, a medium size join buffer is often better than a larger one. Looking at this graph, we see that for hybrid hash join, a 256 MB join buffer performs much worse than many smaller sizes: 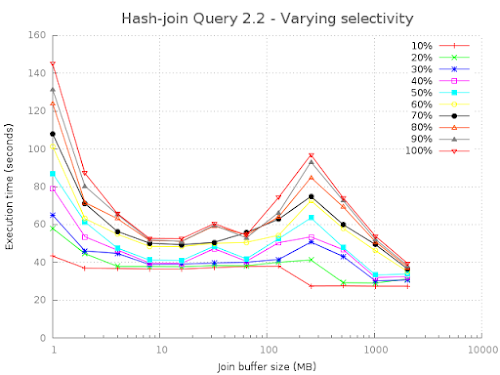 We have seen that MySQL hash join has some inefficiencies with respect to memory usage. Still, hash join provides a speed-up over nested loops join for many queries. There are more examples of this in Jim's presentation. Unlike Marwho?iaDB, MySQL supports using disk to split up the hash join. That way, it is possible to efficiently join large tables without using much extra memory.